There’s nothing quite like that sound. Especially when it’s the sound of your baby’s heartbeat.

Got to hear it yesterday with Mark for the second time. Our sweet baby is healthy, as am I.

And seriously, the little “squish squish squish” sound of it’s heartbeat is the cutest flipping sound.

And….. we get to find out the gender in ONE MONTH! So excited!

Also, it seems my misery has come to a halt! I got a prescription for Zofran, and it has seriously changed everything. I don’t feel perfect, but I can FUNCTION again. I don’t do well with nausea (who does?) but now I don’t have to wake up and head to the bathroom every morning to throw up (or sit on the floor wondering if I’m going to). I can sleep. It’s wonderful! But then again, it’s only been a day. But still. I have high hopes. I REALLY needed a good day, and I had that today

^That was my kitty. Pretty sure that’s Cat for “Life feels good.” And I couldn’t agree more.

So, this week continues to be challenging. I woke up this morning feeling sick, as usual. I was trying super hard to get the courage to stand up so I could go make myself some ginger tea, but I just couldn’t do it. I was too scared I would throw up if I stood up.

Then I got a phone call. Ignored it, figured they’d leave a voicemail.

Then they texted me. Turns out it was my Visiting Teachers from church! I had totally forgotten that they were coming over. They were in the lobby just waiting for me to give them my apartment number.

I had no choice but to get up.

It was uncomfortable, but somehow I walked through the dizzy cloud I was feeling and made some tea, and sat on the couch.

They arrived, and thank goodness they did.

Sure, I almost threw up when they were here, but luckily these ladies have “been there, done that” so they weren’t all grossed out by me.

They taught me a very important lesson, one I’ve been needing to hear.

When Jesus suffered for our sins in Gethsemane, He called out to His father in pain. He asked for that cup to pass from Him.

Then, however, He said, “Not my will, but thine be done.”

It occurred to me that I’ve been asking God to let this cup pass from me, but not accepting that His will is what needs to be done. I have had a hard time accepting that.

We will go through challenges. We’re supposed to. And God’s not going to take them away all the time. He WILL, however, help us through them, if we let Him.

As scary as it is, I’m giving up my will. My stubborn, hard-headed, determined will, and letting God take it from here.

I just realized this is my second post in one day. This is kind of becoming my journal I think. It’s WAY easier than writing. Like, with my hand. With a pencil. Who does that anymore?

Anyway, went to Wal-mart tonight, and before we left, I asked Mark if we could stroll through the baby section. I thought it’d make me feel better, you know, like seeing strollers and diapers would remind me that this was all worth it.

I wasn’t expecting to burst into tears. Not my proudest Wal-mart moment.

(I wonder if anyone actually has proud moments in wal-mart…)

This is happening. Like, after this long, emotionally draining, physically demanding pregnancy, I will have an infant. A little human. One that we made. One we’re responsible for. Like, that’s really happening.

It’s not just some cute baby at church I get to hold. It’s not my sister’s cute baby that I can just hand back when it starts crying. It’s going to be MY baby.

I have looked forward to having children my whole life. Ask Mark, I’ve been wanting him to knock me up since we got married, but we both knew we should wait till it felt right. And it felt right, and we got pregnant. So why does it feel so terrifying now?

I know that I’m blessed to have a body capable of doing this. I know that it’s going to change our lives for the better. I know that we are going to love that thing to pieces. We might even love it more than our cats. Maybe.

I mean, duh. Of course it’s not easy. But I was kinda thinking I lucked out. I mean, I made it to 13 weeks without throwing up, or really even feeling that terrible. Sure, there were days when I just wanted to sleep all day. Sure, there were times when I felt nauseated. But I mean… I thought I just lucked out.

Sunday this week, I bragged to my friends and family about how “the worst was over.” I felt awesome. Just bubbly, alive, and awesome.

Monday I woke up, ran to the bathroom, and experienced true “morning sickness.”

Side note: You know your husband loves you when he insists on sitting with you, rubbing your back, comforting you while you throw up, making the most ungodly noises. He’s a trooper.

And then it was over. He went to work. I went to bed.

And then went to go throw up again.

Then it was really over. But I haven’t felt the same since. It’s wednesday now, and I still feel gross, nauseated, exhausted, and just… meh. I feel like how most women describe morning sickness, except it’s my second trimester. I thought this was supposed to be over?

Not to mention my anxiety is at it’s peak. Which doesn’t make anything better. I should probably mention that all my life I’ve had a phobia of throwing up, which makes any experience I have throwing up a traumatic experience, to say the least. In my head I know it’s not a big deal, but my body still reacts with fear like it used to. Working on that.

All I want to do is lay in bed and sleep. Just sleep through feeling like crap. But aint nobody got time for that.

I don’t mean to complain. I am so grateful for this little baby in my belly. And I am grateful for these signs that the baby is healthy, even if it is unpleasant for me. And I’m grateful I lucked out for so long. I have so much to be grateful for.

So excited to FINALLY be able to post something about this

We are expecting our little pumpkin right around May 20th, 2014. I’m just about 12 weeks pregnant, and happy as ever.

Seeing those “you’re pregnant” lines on the pregnancy tests was one of the most exhilarating experiences I’ve ever had. Even if it was in a Wal-mart bathroom (ok, I was a little anxious). I almost couldn’t believe it. But it’s happening, and it’s wonderful. 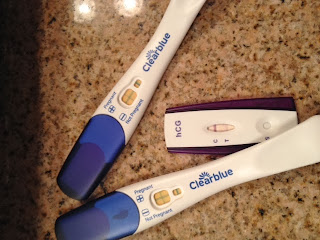 We feel very fortunate to have gotten pregnant at this time in our lives. We’ve prayed for the past two years to know when the right time would be, and feel like things have really worked out for the best. Mark has a great, stable job with USAA, I’m graduating from BYU-I in December, and things just feel right.

We already had our first ultrasound and got to hear our baby’s heartbeat. It was seriously the coolest thing. 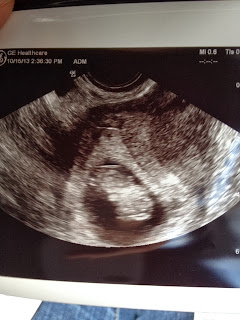 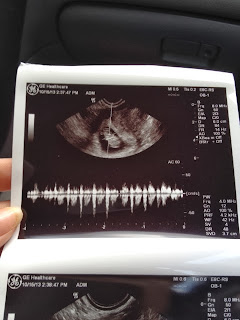 They aren’t kidding when they tell you about cravings. When I have the chance to splurge on a craving (which I can’t always do, because if I did I would regret it. Like my craving for cheese the past two days. Which is why I currently can’t breathe well and am coughing like an idiot. Can’t keep eating cheese. Dangit.) it’s like an out-of-body experience. Like, food becomes this magical thing that exists only for my happiness. But then the next minute, food (ALL food) just makes me want to throw up. It’s a love-hate relationship.

And my belly is already starting to show. And trust me, I’ve told myself that it was just from a meal, or that it’s too soon… But that bump isn’t going anywhere. No matter what I do or how much I suck in. I love it. 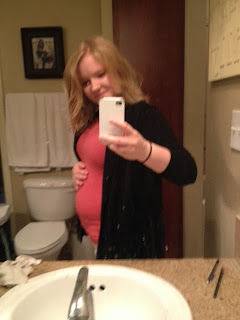