So, if you know us, you know we have a thing for cats. 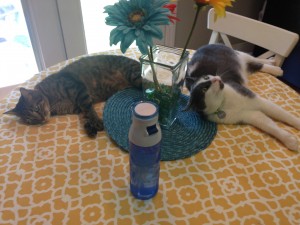 But I think it’s safe to say we’ve taken things to an unhealthy level.

We recently decided to adopt Smalls. 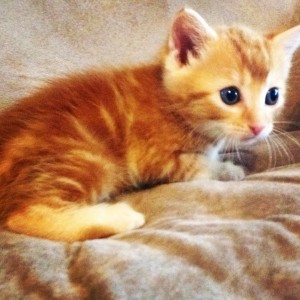 We found him outside our house a month or so ago, and took care of him. And put him on Craigslist. Cause that was the logical thing to do.

And at the first response of interest, we were both like “No, you can’t have him. Never mind.”

So now we have three cats.

Sometimes I wonder what we were thinking. But then they snuggle us all night and I remember.

But here’s where things get complicated. 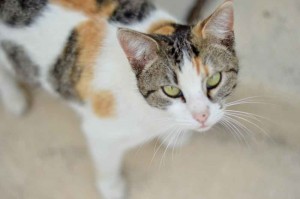 She started all of this.

When we first moved into this house, she greeted my pregnant self with her pregnant self. We were basically best friends.

I had my baby, and she had hers, but we didn’t know how many or where they were or if they survived.

A couple months later, we found them in our backyard. Two sweet kittens. Brother cat and sister cat. Could never catch them, but we fed them. For months. 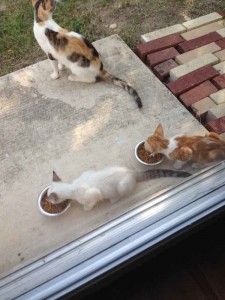 Then, months later, those kittens made kittens of their own. ( I know, it’s off. A little too much sibling love for me.)

The sister was pregnant, then one day she wasn’t. We figured they had died or something cause they were incest kitties.

But then Mark found a sweet little orange kitty with sister in the backyard a few weeks later. No hesitation, he went back and grabbed the kitten and brought it inside.

We then proceeded to get sister cat into the garage so we could keep her contained while nursing her kitten, but not lose the kitten. That way it would also be easter to spay sister cat. We’ve been meaning to get these cats fixed for a while now, so this seemed like the perfect opportunity. 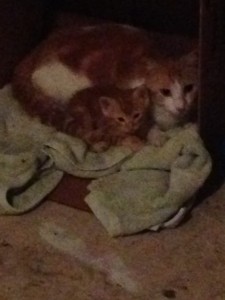 So we got her spayed.

And now she’s outside, living the wild life.

And her kitten, Smalls, is with us. 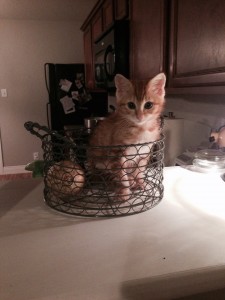 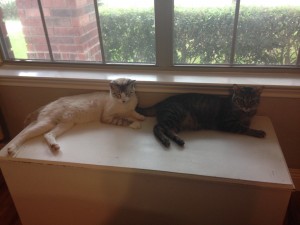 He’s the white one. He doesn’t know he’s not an inside cat. 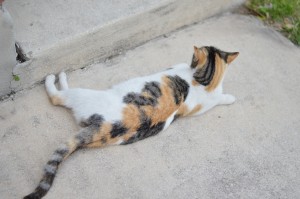 Her pregnant self just waddled up to our house.

And without thinking, Mark grabbed her. And brought her inside. And now she’s in our bathroom with a ghetto litter box and bed and we’re waiting for kittens to arrive.

And then we’re gonna get her fixed.

Did I mention I’m allergic to cats?

P.S. If you want any information about the San Antonio Feral Cat Coalition, we are pretty much pros by now. So if you have multi-generational cat situations like we do, and need help figuring out how to trap/fix/release, we can help

It’s July. In San Antonio. And no matter what we set our air conditioner to, it’s always above 80 degrees in our house. And today I left my flat bread in the toaster oven too long and it caught on fire. And I had to awkwardly transport the flaming machine to the backyard while my baby screamed because the smoke smell. And we had to turn the air conditioning off and leave the windows open to let the hot, humid air circulate to help with the smell. And it still smells like burnt metal, plastic, and bread. And my baby won’t stop climbing on everything. My whole life is chasing around this little boy while he climbs on everything to try to prevent him from falling off the computer desk or piano or kitchen counters or whatever he decides is his new challenge. And that, right now, is an exhausting, sweaty job. 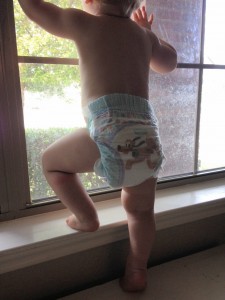 This whole week has been a blur.

Last Monday, the booking producer for KSAT-12’s San Antonio Live show contacted me and asked if I would like to play a couple songs and promote my music on their show.

That kind of opportunity has never happened for me before. So this whole week has been taken up mentally preparing for that. Which is kind of ironic, since in all reality, I was only on TV for like, 3 minutes. Big whoop, right? 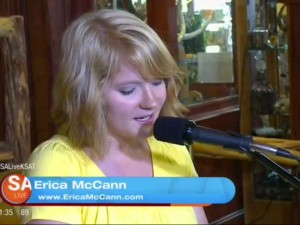 But it was such a cool experience.

(Minus how I failed to consider that I would have to park a few blocks away from the venue, pay $17 dollars for parking, and carry my massive, heavy keyboard bag awkwardly around downtown San Antonio wearing the WRONG shoes. But just when I was seriously down, a sweet man visiting from Shang Hai helped me carry my stuff. It’s the little things.) 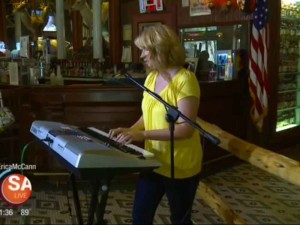 And look, they even showed off baby Erica. 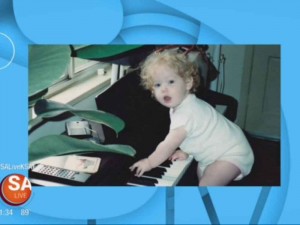 If you missed it and want to check it out, you can see it on their website here. I’m about 33 minutes in.

Thanks for all who checked it out and supported me! Don’t know if anything will come of this, but it was still a great experience and great exposure.

Hope everyone had a fantastic Independence Day!

We spent the afternoon eating fried chicken with friends, and then went off to Fralo’s in the evening. I filled in for a band that backed out last minute, so got to spend the holiday sharing music and celebrating with a restaurant full of people. 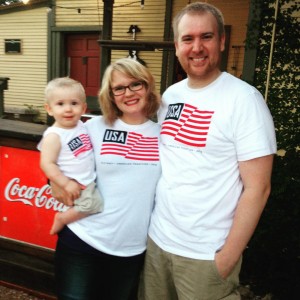 Best moment: Around 9pm, fireworks started going off (it’s an outdoor restaurant so they were right there). I hadn’t prepared patriotic songs (not sure why) but I felt the moment called for it, so I started singing our National Anthem. After the applause I thanked everyone and wished them all a happy fourth, but I received my first real “encore” and was asked to keep singing all the other patriotic songs (America the Beautiful, My Country Tis of Thee, etc). It was an absolute honor to be able to share that moment with that crowd, and really feel the power of our national anthems while fireworks were surrounding us.

My son was less than thrilled about the fireworks, though.